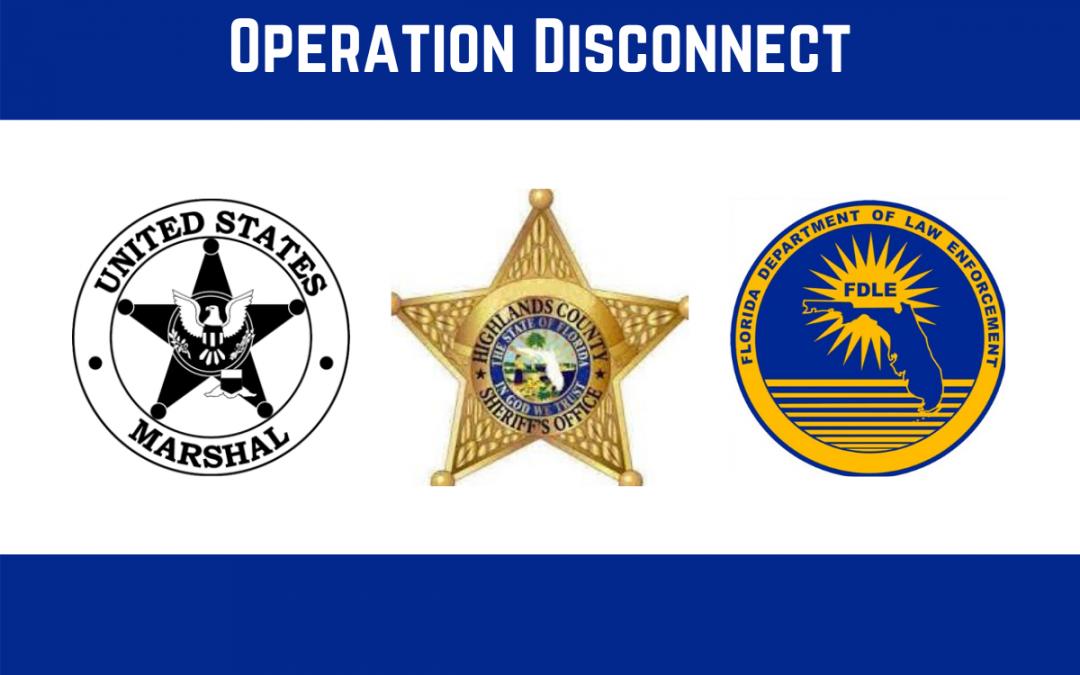 The Highlands County Sheriff’s Office in Sebring, FL, and the United States Marshals Service, in conjunction with the Highlands Probation Office and the Florida Department of Law Enforcement, conducted Operation Disconnect, which led to 37 arrests across Highlands County, FL. Of those arrested, 26 were registered sex offenders who were either banned from having internet access at all or who failed to report their internet usage to the sheriff’s office, as part of their probation. Each failure to report is a felony offense. The investigation also revealed several subjects with active warrants in Special Victims Unit cases.

Highland County Sheriff’s Office launched the operation to confirm sex offenders had reported their email addresses and social media identifiers as required by Florida law. Highland County will be offering the much anticipated OffenderWatch Safe Virtual Neighborhood app to help parents concerned about their children being contacted by sex offenders online. Knowing the offender’s internet identifiers, together with the OffenderWatch app, parents can be alerted when their children are contacted by offenders.

Is Your Child at Risk Online?  5 Questions for Parents

Prior to the operation, the sheriff’s office requested assistance from OffenderWatch to obtain a list of offenders who moved into their jurisdiction from out of state over a two-year period. Using that list, the Sheriff’s office was able to confirm that those relocating offenders were properly registered and arrested two offenders who were non-compliant.

In August 2020, the joint agencies received subpoenas to allow a full search of the offenders’ person, place and property, including electronic devices.

In preparing for the operation, the sheriff’s office used OffenderWatch to search for all sex offenders on probation, collecting their reported email, phone, and social media information, along with home, school and work addresses and other information. “If I had to compile this information on my own, it would have tripled my time,” said Sgt. Steven Ritenour with the Highlands County Sheriff’s Office Special Victims Unit.

Investigators used this info (privacy data was removed) to provide a list of offender internet identifiers and phone numbers as part of subpoenas to several social media (i.e. Snapchat, Google, Facebook and Twitter) and phone providers. Subscriber information from these subpoenas was cross-checked against the information provided by the offender in the OffenderWatch system and discrepancies noted.

The tactical teams executed search warrants and arrested 37 people for over 100 violations and charges. During the operation, electronic devices such as phones, computers and gaming devices were examined for unregistered accounts, which is a violation of the terms of their probation.

As a result of the publicity received from the operation, several offenders have come into the office to update their information or turned themselves in. The sheriff’s office has also received more community tips through OffenderWatch, and they expect more arrests to follow.

“OffenderWatch was key. If not for it, I probably wouldn’t have done this operation,” said Sgt. Ritenour.

The operation was a huge success. Highlands County Sheriff’s Office was able to effectively track offender movements across jurisdictions, access offender records very quickly, produce information needed to obtain warrants and subpoenas, conduct joint operations, and easily share information with partner agencies. OffenderWatch saved many hours by allowing them to search for offenders nationally, report and export data on offenders, centralize the collection of investigative findings, share records with other agencies, and the US Marshals. The net result led to multiple arrests.