OffenderWatch was featured in the media when we presented a local Tulsa sergeant with our national award for excellence in sex offender registry management. Out of 15,000 law enforcement members across the country using OffenderWatch, we selected Sgt. Randy Chapman to receive an award for outstanding public safety.

Watch the full story at KTUL-TV. 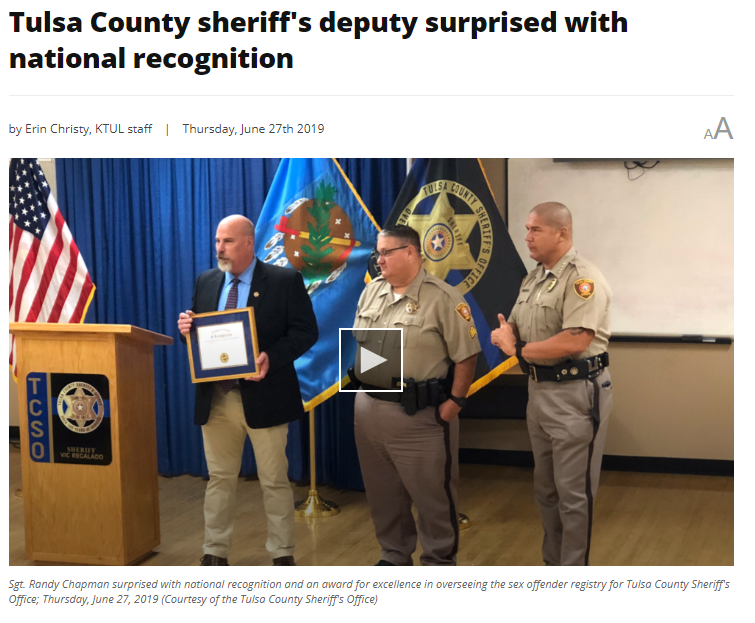 TULSA, Okla. (KTUL) — “I’d like to thank the media for being here today”

It sounded like the start of a regularly scheduled news conference, just like many Sergeant Randy Chapman had attended many times.

But after Sheriff Vic Regalado started talking about recognizing one of their deputies, and continued on about the sex offender registry, Chapman quickly realized he was attending a surprise conference in his honor.

“When they mentioned my name, I thought it was a joke,” said Chapman. “I thought they were pulling a gag on me.”

Sheriff Regalado says Chapman revamped their system, and because Chapman entered more data than required, it helped them solve other criminal cases.

“He has implemented policy that goes above and beyond what’s required by law,” said Regalado.

To Sergeant Chapman, he says, he was just doing his job like everyone else.

OffenderWatch is the largest sex offender registry in the United States and works with more than 3,000 law enforcement agencies. This particular award is given to one person a year.

If you’d like to receive free notifications when a registered sex offender moves into your neighborhood, sign up here.