Over the past several months, OffenderWatch has been proud to recognize several individuals at different law enforcement agencies with a National Recognition for Excellence in managing sex offender registries for their departments. The National Certificate of Recognition is awarded to only a handful of people each year among the 16,000 registered users of the Offender Watch system. 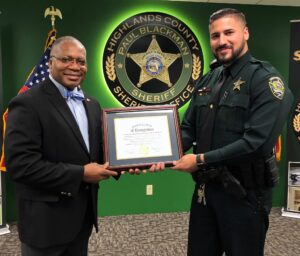 Ramos, who oversees the sex offenders and career offenders living in Highlands county, was honored for implementing “policies and procedures well above the ordinary minimum requirements set forth by state laws so as to ensure the law enforcement community and citizens are made aware of offender movements, status and risks.”

Don Thanars, OffenderWatch territory manager who presented the award, said the entire Special Victims Unit team is to be commended for their work monitoring sex offenders in Highlands County. “It takes all the pieces working together to ensure compliance, and ultimately the citizens benefit. The community should be proud of its sex offender management team,” he said.

Ramos added that he learned how to do his job from Detective Cara Moseley, who held the position prior to him, and that she deserves as much credit for the award.

Fulton County’s previous sheriff, Sheriff Theodore “Ted” Jackson, said, “This critical Unit has continually worked behind the scenes to manage and coordinate all of the sex offender registrants in Fulton County while adhering to social distancing protocols and CDC guidelines for safety during the pandemic. Simultaneously, staff members’ attention to detail with registrant records and networking with detectives and other law enforcement jurisdictions is an excellent example of the quality of service our deputies and civilian staff give daily.”

The Fulton County Sheriff’s Office is responsible for more than 2,500 offenders throughout the county. The Sex Offender Unit is comprised of the following individuals: Mrs. A. Gaither, Mrs. J. Smith, Deputy L. Cummings, Deputy L. Williams, with assistance from Ms. Vickie Davis, and Sergeant A. Slocum.

Since the start of the pandemic, the FCSO Sex Offender Unit registered more than 150 new offenders. The Unit provided services to 829 offenders and issued 118 warrants for those offenders not in compliance. 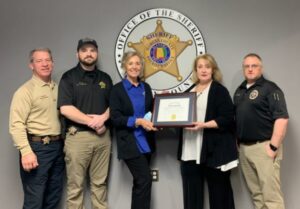 The SVU team manages approximately 200 sex offenders and has a 99 percent compliance rate among offenders – meaning 1 percent of the offenders have a compliance issue during the year.

Individuals who fall out of compliance are quickly followed up with by investigators and can face additional charges.

In addition, the SVU team also works to ensure complete, accurate and comprehensive offender records; to track offenders moving in and out of the county; and to promote interagency cooperation with the U.S. Marshals Service investigating and locating runaway offenders. 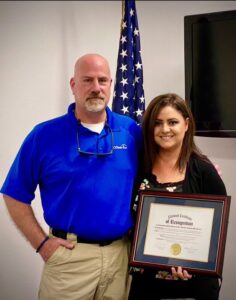 As an Investigative Specialist, one of Aispuro’s many duties includes managing the city’s sex offender records on Offender Watch.

Aispuro diligently checks sex offender records to make sure they are up to date and verifies that offenders are compliant with the law, which helps keep their neighborhoods safe.

This also allows the department to provide timely and accurate information about convicted sex offenders to the community.

“It is truly an honor to be recognized by Watch Systems and I am very humbled to receive this award,” Aispuro said. “I know I would not have been considered if I didn’t have the support of such an amazing team. I am very proud to be part of a Blue Family that is so dedicated to serving our community. This really is a team award.”

Aispuro has served nearly 20 years with the department.

“It is apparent that public safety is a top priority for all of these agencies, with the entire staff working together to go above and beyond what’s required by state law. Their staffs work very hard to collect comprehensive data on every sex offender in their jurisdictions so that the public has all of the information necessary to protect themselves,” said Mike Cormaci, president of OffenderWatch.

The OffenderWatch Network is the largest sex offender registry system in the U.S., working with more than 3,000 local, state and federal law enforcement agencies in 37 states.